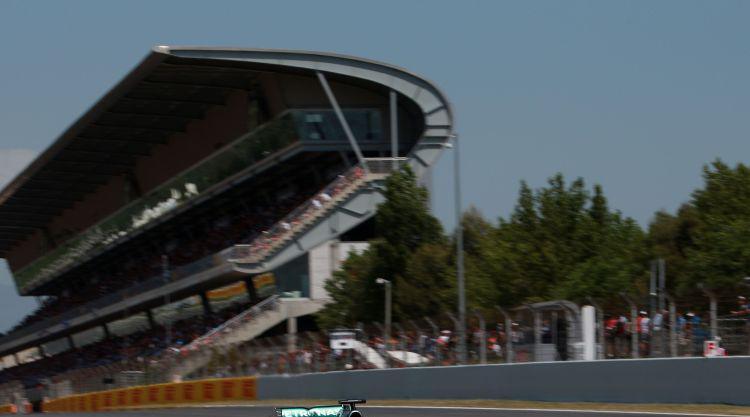 Lewis Hamilton began his championship-winning parade in dominant fashion after he completed a practice double for the Brazilian Grand Prix.

Hamilton, who has a fourth star on his crash helmet this weekend to represent his latest world title triumph, arrived here in Sao Paulo in the spotlight following claims that he had avoided a Â£3.3million VAT charge on his private jet.

But the 32-year-old Englishman put his off-track troubles firmly to one side to end both sessions at the summit of the order ahead of his Mercedes team-mate Valtteri Bottas.

After sealing the championship with three rounds to spare back in 2015, Hamilton lost the final races to bitter rival Nico Rosberg - a momentum the German carried over to his title-winning campaign.

But Hamilton has vowed not to make the same mistake this year, and started the penultimate weekend of the season in imperious form.

After going fastest in the opening session, Hamilton returned to the track on Friday afternoon to post a best lap of one minute and 09.515 seconds to edge out team-mate Bottas by just five hundredths of a second on a strong day for Mercedes.

Red Bull's Daniel Ricciardo, who is set to serve a 10-place grid penalty following a series of changes to his Renault engine, was third fastest, a quarter-of-a-second shy of Hamilton with Sebastian Vettel next up.

Vettel, who led the majority of this year's championship battle before his charge imploded in the Far East, faces a battle to finish the season as best of the rest behind Hamilton with Bottas now breathing down his neck.

The Finn is just 15 points behind Vettel and will be heartened to have finished ahead of the Ferrari man in both sessions here. Max Verstappen, who claimed his second win of the campaign in Mexico last time out, was fifth quickest ahead of Ferrari's Kimi Raikkonen.

George Russell, the 19-year-old from King's Lynn, Norfolk, was handed his grand prix berth by Force India here, and he ended the opening session a commendable 12th. Russell finished 1.8 secs slower than Hamilton and a little more than half a second adrift of Esteban Ocon in the other Force India.

Toro Rosso suffered engine problems on both of their cars with Brendon Hartley's opening session ending in a plume of smoke before he had completed one lap, while Pierre Gasly was restricted to just five laps before technical gremlins curtailed his running. Both returned in the afternoon, with Gasly 16th, one spot ahead of team-mate Hartley.

Elsewhere, Felipe Massa was eighth for Williams ahead of his final home race, with McLaren's Fernando Alonso 10th.